At first glance, our obsession with vampires seems a bit morbid. But once you think about it, things start to make sense. Immortality, eternal youth, superhuman powers, ability to fly, what’s not to like? Sure, there are a few snags, like the inability to move around during the day and having to stay away from shish-kebab and garlic bread is definitely a no-no. Oh, yes, there is that whole “feeding on people and drinking their blood until they die” thing. So, just a few minor inconveniences.

Vampires are present in several ancient cultures and are often associated with bats and other night creatures. Almost all the movies made about them heavily rely on that fact, starting with the first vampire movie Nosferatu in 1922, and the ones found on Netflix are no exception. If you are looking for one to spend the night with it, here are our suggestions.

Henry Rollins plays Jack, an immortal vampire who is fed up with the life of violence and killings and tries to live his life away from people, in almost full seclusion. Unfortunately, the world has other plans with him and he gets drawn to his old life once again.

One of the newer additions to the vampire universe, Family Blood deals with an interesting premise. What happens when Elli, a recovering addict, is turned into a vampire and swaps heroine with human blood? The short answer is nothing good. To complicate things further, Ellie has two teenage kids, who struggle with accepting a new version of their mum.

A typical story about a boy who decides to join the circus and see the world outside his small town. Except with vampires. When Darren meets a stranger from the visiting freak show, he doesn’t know that he has just met a vampire. He agrees to become one as well, but struggles with the final prerequisite, taking a life. His friend, however, doesn’t have that problem.

4. My Babysitter’s A Vampire

Ethan Morgan is just a regular teenager. He is thrilled to discover that his parents have hired Erica, a cute girl from his school, to babysit for his baby sister while they are away. His romantic hopes get squashed when he discovers that Erica is, in fact, a vampire. Now he must organize his friends to fight Erica and her group of bloodthirsty vampires.

Perhaps the most important vampire movie, Bram Stoker’s Dracula set rules that most of the later vampire movies follow. It is one of the best movies Francis Ford Coppola ever made and a must-watch for all vampire fans. 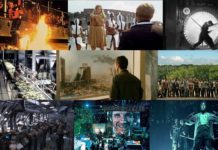