Can you imagine a world without music? Even if you can, it is clear to you that it would be a very empty and boring world. As long as our knowledge of human history reaches, music was and is always present. Of course, in the beginning these were primitive forms, and now we come to fantastic works of art. In any case, many agree that there is nothing that can be considered as universal language more than music. Because it transcends nations, races and distance. Also, it is increasingly used for therapeutic purposes. We listen to it both when we are happy and when we are sad and when we want to focus. When we think about it, music is always around us.

This is exactly what stimulates tens of thousands of young artists to try themselves every year and make a successful career. Most of them fail in their attempt because they lack talent. But there are also those who are very talented and can offer us fantastic songs, but they have a hard time breaking through. This is normal because the competition is huge. It has certainly happened to everyone that you hear a song that delights you and you wonder how you have never heard of a performer. This happened to us when we heard the songs of Erfun Khoshdel, a new artist who is slowly making inroads on the Iranian pop scene. Read more about him below.

If you love pop music then Erfan Khoshdel is a name you should definitely remember. His nickname is “Erfun” which clearly tells you about his personality, as well as what kind of music you can expect from him. He believes that the most important thing is that life is full of joy and fun, and that music is exactly what will bring us joy and fun. Although Erfan Khoshdel started his career just recently, he already has his own recognizable style which can make him world-famous. He will have to put in a lot of effort to achieve his goals because there aren’t a lot of Persian pop musicians who are popular worldwide.

He has been playing piano and guitar since an early age, so we can say that music has always been an integral part of his life. Ever since he discovered his love of songwriting, it was clear to him that this was the path he wanted to take. To combine his literary and musical talents and create pop songs.

His first song, which you can listen to on Spotify, YouTube, Apple Music and other services, is “In Gheyre Momkene”, which means “It’s impossible” in English. In it, he talked about how it is not impossible to make a success, even against all odds. This was followed by the song “Ashegham Man” (I am in Love), which probably associates you with love for a girl. But still, Erfan focused on love in general and how love is necessary for the whole world to be happy. He then released two more songs, “Chatr” (The Umbrella) and “Sale Pish” (Last Year) that you can also hear on Spotify. What is noticeable is that each new song brings him increasing popularity, which is reflected in the number of views on YouTube. “Sale Pish” has by far the most views, followed by “Chatr”. We believe that the success will continue when he releases his first album, which he is currently working on.

Erfan decided to collaborate with Limak Records, which are known for “Sound Of Middle East”. If you read more about Limak Records you will not be surprised why he chose to collaborate with them. They have been around for more than 10 years and during that time have proven to be an ideal option for all independent musicians. Why is it so? So for many independent musicians, contracts with record labels can be very unfavorable. On the other hand, Limak Records offers this kind of collaboration that the artist retains full control over his music. They conceptualize their contracts with artists in such a way that they are very artist-friendly. The licenses they receive do not last as long as with some other record labels and after that artists regain full ownership of their music.

This is exactly what Erfan wanted and he considers it the best way to start his career. He didn’t want to lose control of his music in the long run, but he certainly knew he needed a record label and that’s why he chose Limak Records. Another great advantage of working with them is that Erfan, even when he becomes very popular, will not have to give them a percentage of earnings. Only a fixed amount of money that they agreed on at the beginning of their collaboration. That is why he will be able to invest everything he earns in further improving his career and growing his fan base.

Every artist has his role models, and same is the case with Erfan. Although, of course, he has idols among the world’s famous pop musicians, Iranian pop singers can serve as his inspiration. After the 1979 Revolution, pop music was banned in Iran. This lasted for over 10 years until the government decided to allow the pop again. But  it was not until the end of the 20th century that the first band, including women, appeared. However, it was not until 2009 that the first Iranian pop artist made a significant breakthrough on the European market, and that is one of Erfan’s idols, Sirvan Khosravi. At that time, his songs could be heard on various European radio stations, most notably his biggest hit Saat-e 9 (“9 O’Clock”). A year later, another Iranian artist, Farzad Farzin, showed that it had become possible for singers from that country to break into foreign markets. He was on the European charts with his hit Chike Chike (“Trickle Trickle”) for two weeks, which brought him great fame in Iran. The two of them, like many others, serve Erfun as inspiration.

We are glad to have the opportunity to better introduce you to Erfan, who is the voice of the new generation. Now go and listen to a few of his songs. 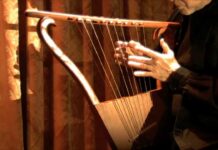 6 Most Famous Voice-Over Artist in the World – 2022 Guide

Obsessed With Poker Much? So are These Celebs – 2022 Guide